Create an Account - Increase your productivity, customize your experience, and engage in information you care about.

In order to prevent further deterioration and to encourage historic preservation of the downtown district while also encouraging economic growth in the area, the Cadillac City Council established the Downtown Development Authority of the City of Cadillac (the 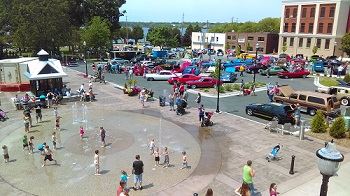 “DDA”) pursuant to Act 197 of 1975 (“Act 197”) by adopting Ordinance 842 on June 14, 1976. At that same time, the City Council also approved a two-mill levy to be collected by the DDA from the downtown development area. The millage is only levied on parcels within the district to fund the operational and development-related costs of the DDA.

To further promote the downtown district and to secure a source of funding for downtown development, the DDA approved a Tax Increment Financing (TIF) and Development Plan (PDF) on November 17, 1992. This 40-year TIF plan was then approved by the Cadillac City Council on January 18, 1993 in accordance with the requirements of Act 197. The plan first captured taxes in accordance with the TIF plan in 1997.

The TIF plan program shall be in effect from 1993 through 2033, and TIF funds received under this plan shall be spent only in accordance with the area Development Plan.

The DDA is led by a 10-member Board of Trustees. The members are appointed by the City Manager, subject to approval by the City Council. The Authority’s primary role is the redevelopment of Cadillac's downtown area. In accordance with the state enabling legislation, a majority of the DDA board members shall have an “interest” in the DDA district, meaning they own a business or property, work or live within the DDA district.

The DDA meets every month on the last Wednesday of the month at 7:30 AM in Conference Room 1 of the Cadillac Municipal Complex. All meetings are open to the public. Past minutes of the DDA Board are available in the Archive Center.

As required by recent State legislation (Michigan Public Act 57 of 2018) the Authority will hold two annual informational meetings. Informational meetings are meetings for the purpose of informing the public of the goals and direction of the authority, including projects to be undertaken in the coming year. They are not for the purpose of voting on policy, budgets or other operational matters.

Additionally, the DDA approves an annual budget, which is subsequently approved and adopted by the City Council. All financial statements of the authority are audited annually as well, and included in the Comprehensive Annual Financial Report that is completed by the City of Cadillac each year.

Current contracts:  The DDA is not currently party to any open contracts.

Other activities:  The DDA facilitated the reconstruction of a primary downtown parking lot. Construction was completed in 2017. This new space, called The Plaza, is a key component in the reformation of the downtown area collectively known as Cadillac Commons. The Cadillac Commons includes the Rotary Performing Arts Pavilion, the City Park, and The Market, all of which are currently operational. In 2019-2020, The Trailhead will be completed, which will extend the White Pine Trail into the downtown area.